Take the Mantle (with Tarana Burke)

This week on Professional Troublemaker, I’m talking to someone who is the literal walking definition of what a professional troublemaker is. She’s a truthteller, she’s a disruptor, she’s a trailblazer and a change agent – activist, author, and speaker Tarana Burke.

I love to start these conversations by asking my guests what they were like growing up, and what they wanted to be when they grew up. Tarana is one of my favorite people to talk to when it comes to revisiting past lives because she’s been down so many paths to become the person she is today. She’s been a fashion blogger, a community organizer, and I learned something new about her background in this conversation too!

I was really moved when Tarana was talking about the life her family provided her. They didn’t have much, but they had enough, and when opportunities came Tarana’s way – specifically a chance to go on a leadership training trip – her mother always found a way to say “yes” to those opportunities.

Putting your ideas, putting yourself out there is something that brings fear right into your face, but I loved this word that Eunique was preaching about one of the reasons that fear pulls up in front of us that we may not always consider:

Like many leaders in the anti-racism and activism space, Tarana found herself with a whole bunch of white followers after the protests across the country following the deaths of George Floyd and Breonna Parker in the summer of 2020. We talked about how wild that experience has been for Tarana and her friends, as well as the unexpected lessons Tarana has learned.

Throughout her career and everything she’s done, Tarana says:

I do this Black girl thing for a living. And I create good trouble for a living. And those people who think that it’s trouble, though, are exactly the ones who I’m trying to transform, who need to hear a message, who need to see the activity and know that you’re calling this trouble, but it’s not, actually. This is life-affirming, life-changing, a necessity for us to live amongst each other. Right? At the end of the day, again, our humanity, it’s the highest order. We should be doing things to make sure that we are able to live amongst each other with our dignity intact, with our humanity intact. And if it takes making some trouble, then I’ll be a professional troublemaker.

The greatest gift my mother gave me was a ‘yes.’

When opportunities came, she said ‘yes.’

When you see something that is not right and not good,

you have to be active and do something about it.

If you cannot engage with Black humanity, then I don’t believe your anti-racism. In order

to really be anti-racist, you have to engage with Black humanity.

We should be doing things to make sure we are able to live amongst each other with our dignity intact. And

if it takes making some trouble, then I’ll be a professional troublemaker. 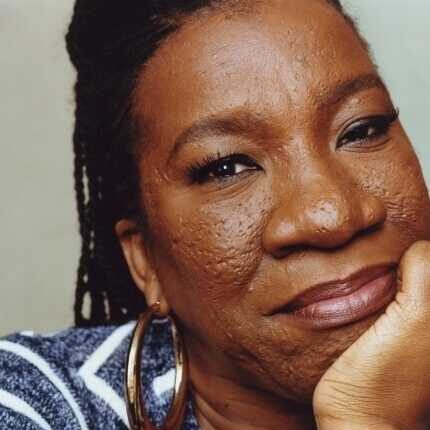